The future for bus demand after the virus

The future for bus demand after the virus

In common with lots of other people, I have in recent days been trying to assess the likely consequences of virus crisis on bus demand.

It is not easy to predict anything at this stage, since timing still seems so vague, and we do not yet know how long the various phases of lockdown, social distancing and recovery are going to last.

I have considered three headings to consider how things might develop after the initial lockdown period ends. They are:

I have called the first phase “Social distancing”. During this period, restrictions will be progressively lifted and economic life will restart in limited form, but it can be expected that not all venues will reopen, and there will be some unwillingness to leave home – especially amongst older people and those with underlying health conditions. Schools, universities and colleges may not reopen fully until the autumn. Those who are obliged to travel to and from work may prefer to do so in their own car or a taxi rather than sharing space on public transport. Social distancing on public transport will reduce capacity dramatically - latest estimates seem to be that trains will carry 15% of capacity and buses around 12%.

This phase is likely to last several months and will not be fully over until a vaccine and/or drug treatment can be developed and manufactured. Meanwhile, alterations to behaviour and the economic consequences of the crisis will start to play out.

It seems increasingly likely that some of the habits that we have been forced to adopt during the crisis will continue after it is over – especially where these merely accelerated trends that were already under way. These changes are likely to affect all journey purposes:

There are almost no historical parallels for the current situation. During previous emergencies such as the two World Wars, the demands on public transport operators were about excess demand on diminished capacity. The only distant parallel that I can suggest, and have floated to other colleagues, was the 1958 bus strike in London, which caused huge lasting damage to the network's standing and commercial performance. The figures (taken from Barker & Robbins A History of London Transport Volume 2) show that in 1957, patronage on the central (red) buses and trolleybuses was 2,841 million journeys. In 1958, the year of the seven-week strike, this dropped to 2,236 million. It recovered in 1959, reaching 2,470 million. But this was 13% below the 1957 figure. By 1962, patronage was below the 1958 figure, even without a strike (see chart). This was of course the era of the Macmillan government and his famous "You've never had it so good" line - so a proportion of the fall would probably have happened anyway. But there is little doubt that the disruption of those seven weeks was a significant contributory factor in driving change in people's travel habits. 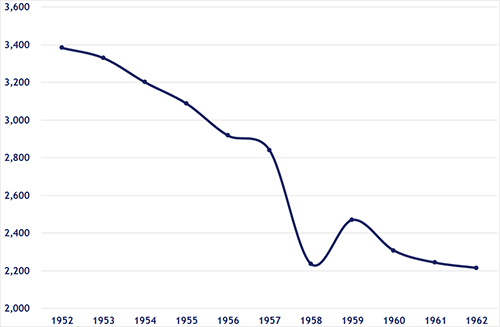 There is little consensus amongst economists as to the nature and extent of the damage that the crisis will have to done to the economy. Some argue that there will be a quick bounce back to activity levels seen before the lockdown; others suggest long-lasting damage. There is a consensus that public spending will be under pressure and that higher taxation is likely to be necessary to service and repay the huge debts that will have been incurred.

Looking again at the five principal purposes for travel by bus, it is possible to identify the threats to each:

The expectation must be that a combination of some or all these movements would have serious consequences for the current level of demand for bus travel. Given the nature of the business and the marginal nature of much of its existing level of supply, further service cuts or fare increases would be inevitable without continued government intervention.

An illustration of the points discussed in this section can be seen in the diagram below, which is taken from our new report The Bus Demand Jigsaw 2020. At its core is a doughnut graph of the estimated proportion of bus trips by journey purpose, extracted from the National Travel Survey 2018 but slightly simplified.

Outside the doughnut are three concentric circles, representing the three types of risk discussed above, which we categorised as “social distancing” (inner), “lifestyle changes” (middle) and “the economy” (outer). Within each segment of each journey purpose, the possible cause of a fall in demand as a result of each risk is noted.

The list is not exhaustive, and some will inevitably overlap (for example, declines in leisure spending and high street shopping would inevitably reduce the number of jobs in hospitality and retail, further impacting on demand for travel to work). In current circumstances, any modelling of potential outcomes is very uncertain indeed.

As a rough guide, using the journey purpose numbers, outline calculations on a set of “reasonable” forward assumptions for each journey purpose suggests that a period of social distancing could be expected to run at around 55% to 60% below previous demand levels depending on available capacity. It seems likely a return to “normal” would be at a level between 18 and 26 per cent lower than before the lockdown. Even getting to those levels would depend crucially on the extent and speed of the recovery in the wider economy.

The Circles of Risk 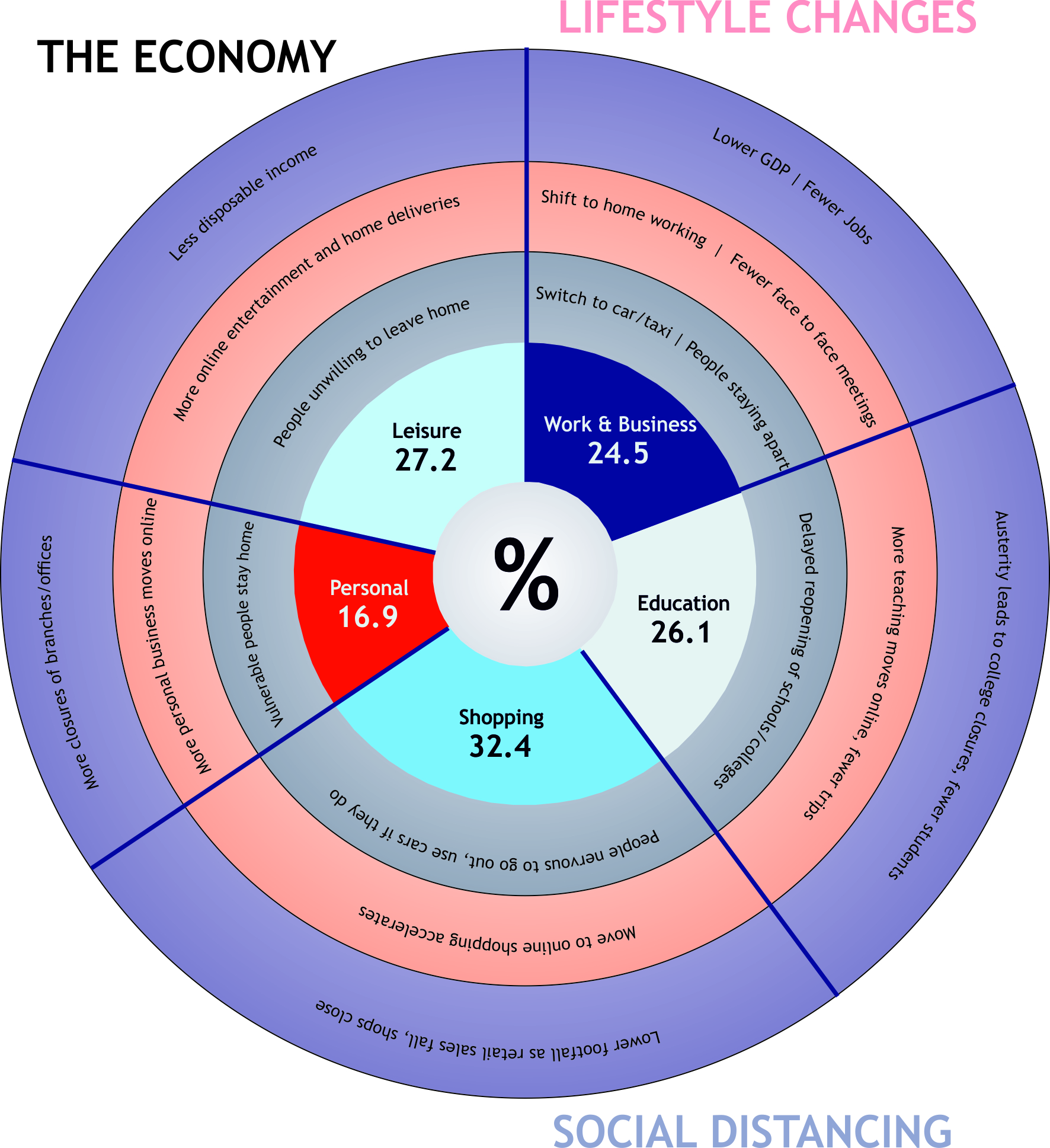