Summer numbers disappoint on the buses

Summer numbers disappoint on the buses

English PTEs and Wales see 5%+ drop in passenger numbers as patronage continues to fall during the three months to 30 September, in a ‘summer of discontent’

Bus demand in Great Britain fell once more in the quarter ended 30 September by 1.9 per cent, according to statistics published by the Department for Transport. The fall meant that the rolling year total stayed below five billion for the fifth quarter in a row – the lowest patronage since March 2007.

The fall was not unexpected, as the economy continued to be in the doldrums, with static or falling high street footfall and household incomes that remain static or are still falling.

The DfT’s provisional seasonally adjusted estimates put total demand during the twelve weeks at 1,211 million passenger journeys, compared with 1,235 million in the same quarter in 2016, a fall of 1.9%. The figures show that demand fell by 5.8% in Wales, 5.4% in the English PTE areas, 3.4% in Scotland and 1.8% in the English Shires. Demand continued to fall in the capital as well, but the change was barely perceptible. The total for Great Britain outside London was 3.5% down on 654 million.

The provisional figures for the whole year to 30 September show total demand for bus services in Great Britain at 4,897 million passenger journeys, 1.8% lower than the same figure in 2016. This is the lowest figure since March 2007, just before free concessionary travel was extended to all areas of England.

Over the last five years, the numbers show an overall decline of 4.7% in the GB total. Wales led the downward spiral, with a fall of 7.9%, followed by the English PTE areas on 7.7%. The decline in London was 3.8% whilst the English Shires saw the smallest drop of 2.9%.

The latest fare indices, also published by DfT in December, show that in the year to September, bus fares fell by an average of 0.6% after taking account of inflation, compared with September 2016.

However, the average once again disguised some variations: the indices show fares in some areas continuing to fall – particularly in London, Scotland and Wales. The largest real decrease came in the capital – 2.7%.North of the border, Scottish fares fell by 1.6%, whilst In Wales, there was a decrease of 2.0%. There were increases elsewhere, though, including 1.4% in the English Shires and 0.3% in the PTE areas.
Looking back over the last five years, fares in the capital have fallen by 3.6% - earlier rises under the previous Mayor are being offset by Sadiq Khan’s fares freeze and the introduction of the Hopper ticket. Fares have also fallen in Wales by 1.5%. Elsewhere there have been real-term rises, including 4.7% in the English Shire areas and 2.9% in the English PTE areas.

Judging by this summer quarter, things remain pretty grim for commercial bus operators, as services continue to haemorrhage passengers at a steady rate.

There are a number of things going on here, as major social and economic change continues apace. In my article on the last quarter’s figures, I discussed shifts in purpose for which people are travelling – both generally and by bus. I also referred to major shifts in travel patterns amongst the different generations.

Overriding this, though, is the fact is that we are all travelling less. Looking at last summer’s National Travel Survey, the number of journeys over one mile undertaken by each person by all modes has fallen by almost 12% since the peak was reached shortly after the turn of the century.

These figures suggest that each person in the country in 2016 was making 96 fewer trips each year than was the case in 2002. For some time, this fall has been disguised by an overall increase in the population, so that the overall volume of movement has continued to increase. However, as population growth slows following the Brexit referendum, the change in personal travel habits will also be starting to feed through into overall volumes.

A second factor is that there may be some sign of the ‘Uber’ effect in National Travel Survey statistics. The 2016 survey showed a 12% increase in the use of taxis and private hire vehicles. True, the number of trips per person per year using these services remains below levels seen around the turn of the century. Nevertheless, the 2016 figure is the highest recorded in the NTS since 2005. This number will therefore be watched closely in the next survey, to see if this is the start of a trend.

Another factor that has been put forward as a reason for a decline in travel, particularly in the use of season tickets, is an increase in working at home. Unfortunately, this question was not asked in the 2016 survey, so the most recent NTS data is from 2015. This suggested that 4.9% of the workforce was working from home, or the same building as home. This was in fact rather lower than the figures in 2013 and 2014.

However, according to the Labour Force Survey (LFS) undertaken by the Office for National Statistics (ONS), the proportion rises sharply if you include people who base themselves at home but go out frequently to meet clients – add these in and the proportion rises to 13%.

A third point is that both the NTS and LFS figures are referring to people who work full time from home. It is much more difficult to research those who work one or two days a week from home – but the suspicion is that this is definitely on the rise.

Given all these massive changes in the way we live, work, do business and shop, it is perhaps no surprise that use of the bus is declining, especially as journeys get slower and less reliable in the face of growing traffic congestion.

In the end, though, the bus industry is definitely not in charge of its own destiny, and we really must stop pretending otherwise. People use the bus to enable them to do other things: get to work, go shopping, go to the bank or building society, go to school or college or just visit friends. If they do these things less often, then they will use the bus less often. Simples. 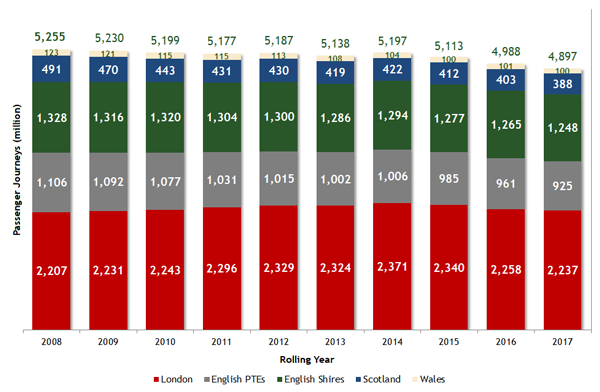 The graph shows the trends in demand for bus services over the last ten years across Great Britain, by market segment.